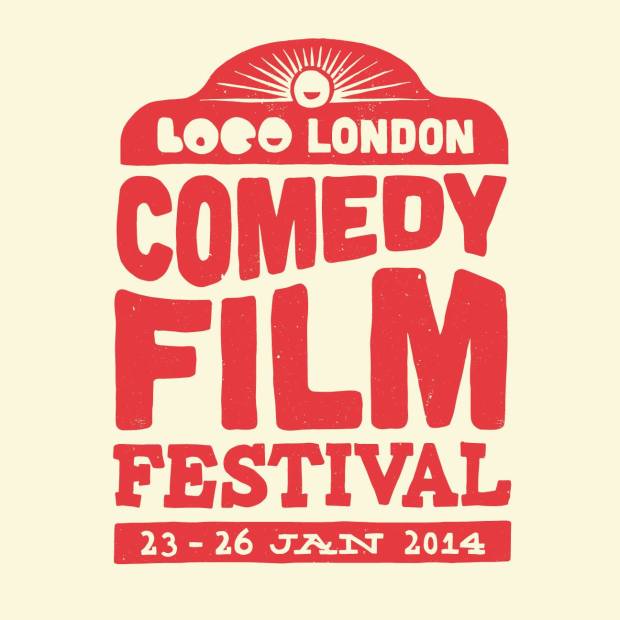 The LOCO LONDON COMEDY FESTIVAL  returns this weekend (23 – 26 January 2014) for the third year with its biggest ever line-up. Spread over four days  at venues across the capital (BFI Southbank, Hackney Picturehouse, Ritzy Picturehouse, Greenwich Picturehouse, Institut Français, the Lexi Cinema and more), the festival will showcase the world’s best funny films, lightening up London in the most miserable week of the year.

With its commitment to discovering and developing new British talent, LOCO will present the World Premiere of Jamie Adams’ independent British comedy Benny & Jolene (24 January, BFI Southbank). The film stars Craig Roberts (Submarine, The Double) and Charlotte Ritchie (Fresh Meat) as an indie folk duo trying to balance credibility with commerce, and just possibly falling in love along the way. The screening will be followed by a Q&A with director Jamie Adams, producer Jon Rennie and lead actress, Charlotte Ritchie. LOCO will bring summer to BFI Southbank for its premiere, creating a festival vibe with live music and DJs, accompanying the second film of the night – a preview of Lukas Moodyson’s festival favourite, We Are The Best, in which three Swedish teenagers form a punk band.

LOCO has a strong track record of introducing British audiences to the best foreign language comedies, proving that language is no barrier to laughter. UK Premieres in the festival include Les Coquillettes (23 January), a witty double narrative that contrasts three friends’ accounts of their romantic adventures at the Locarno Film Festival (where the film was both shot and premiered), with flashbacks to what actually happens when Sophie pursues her film star crush. Writer/director/star Sophie Letourneur, who is being hailed as the French Lena Dunham for her funny, refreshingly frank comedy, will make her first appearance in the UK at the festival. Another UK premiere is Matterhorn (26 January), which won the Audience Award at the Rotterdam Film Festival and the Audience Award and Best Film at the Moscow Film Festival, a deliciously deadpan Dutch tragi-comedy that follows two men and a dream to climb the Matterhorn.

One of comedy’s most important roles is to poke fun at the powerful. Satire rarely changes systems, but it does change people. By exposing how media, marketing and political systems work, satire can show people how to laugh at them and thereby diminish their influence. So this year LOCO will be celebrating satirical comedy, with Satire Day, a full day of discussions, screenings and live performance (Saturday 25 January, BFI Southbank) and a 50th Anniversary screening of Stanley Kubrick’s Dr. Strangelove or: How I Learned to Stop Worrying and Love the Bomb (25 January, BFI Southbank) with special guests including Kubrick’s friend and producer Jan Harlan. Other satirical screenings include: Trafic (26 January, Institut Français), the classic 1971 Jacques Tati French-Italian comedy; Doomsdays (23 January, BFI Southbank), a Kickstarter-funded pre-apocalyptical comedy that has been described as “Michael Haneke meets Wes Anderson”; Life of Brian (23 January, The Lexi Cinema); and The Infidel introduced by its writer, David Baddiel (26 January, Hackney Picturehouse).

LOCO has commissioned artist Rachel King to work with the festival’s artists in residence for 2014, Crank Theatre, to create The Face Of Satire (23 – 26 January). This will be a unique exhibition of photographs of Britain’s leading satirical writers, performers and thinkers. Sitters include John Lloyd, David Baddiel, Bryony Kimmings, Howard Jacobson, Al Kennedy, Sara Pascoe, and many more.

Cementing their commitment to education, LOCO will also launch School of Satire, a schools programme encouraging satirical thinking through sketch comedy, cartooning, art and writing. By giving children the tools of a satirist LOCO will help to increase their media literacy and critical thinking in an engaging, creative and entertaining way.

LOCO’s mission is to discover, develop and screen the world’s most distinctive comedy film-makers. Each year they present two Discovery Awards, for a short film and a feature, which highlight the most exciting and original new British comedy talent, chosen by a panel of industry experts. The winners will be announced on 1st January.

For aspiring comedians aged 6 – 12, LOCO’s popular School of Slapstick returns to BFI Southbank with another opportunity to learn silent comedy techniques and make short silent comedy films. To celebrate the 100th anniversary of the Little Tramp character, the festival will screen Charlie Chaplin’s silent satire The Idle Class (26 January), in a double bill with Buster Keaton’s satirical silent One Week. An original live score performed by The Lucky Dog Picturehouse will accompany the two films.

LOCO will present Killer Dialogue and the Art of Representation in association with Birds’ Eye View Film Festival (26 January, BFI Southbank). The female stars of the 1940’s had equal billing and their dialogue was as filthy, feisty and cutting as their male counterparts, if not more so. With archive footage and an industry panel comprising writers, comediennes and a psychologist we delve into what makes great female characters and how to write them.

The festival will close with 21st Century Sketch (26 January, BFI Southbank), a celebration of contemporary sketch comedy with clips from TV and the internet, and live performances from some of Britain’s most exciting sketch comedy artists.

LOCO is a not-for-profit foundation that champions the craft of comedy film-making through training, screenings, outreach and funding. It was founded by Denise Hicks and Jonathan Wakeham in September 2010, and its mission is to kickstart the next generation of British-based comedy film-makers.

LOCO’s first event was a 30th Anniversary screening of Airplane! with writer-directors David and Jerry Zucker and star Robert Hays. Leslie Nielsen sadly died just ten days before the screening, which became a celebration of his life and work, described by The Guardian as “the perfect tribute to an actor who has gone to the great departure lounge in the sky”.  This is LOCO’s third comedy film festival.

Formerly staff writer for The Independent Film Magazine, Dana is a freelance journalist who covers film, tech & startup culture. Between 2013-16, she traveled to film festivals all over the world interviewing filmmakers for a book project on contemporary cinema. Dana holds a BA (Hons) in Film & Media from Birkbeck, University of London (2013), a BA / MA in English & French Language & Literature (2005) and specialist training in bio-medicine.