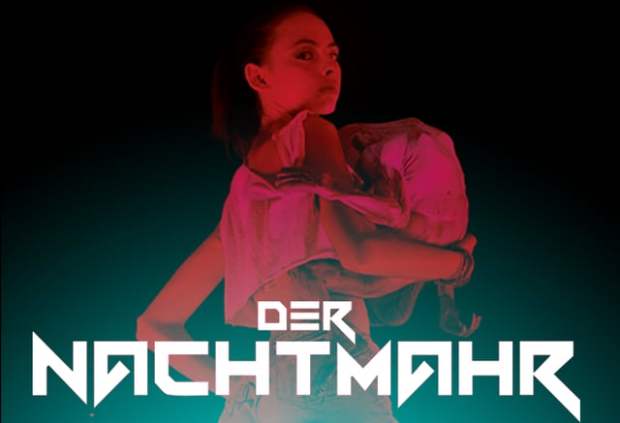 Knight: I was a bit surprised to see a film like Der Nachtmar in the Locarno line-up, I must confess I’m not totally sure what to make of it!

AKIZ: This film is nasty and it hurts, it doesn’t really fit in here.

Knight: It’s definitely an unusual creation. You’re an artist and you’re probably used to having total freedom in your creative endeavours, film is a much more conventional art form but I felt that you took this freedom to cinema.

AKIZ: Thank you for saying that. We definitely had limitations, we had no money for this film but also there were no strings attached! We could do whatever we wanted, that’s why the film turned out to be the way it is.

Knight: Let’s talk first about the screenwriting process, how did the story take shape in your head, how was the creature born?

AKIZ: I was obsessed with this creature, I initially had the idea of making a sculpture, not a film. The idea gradually evolved and took many forms,  it took me almost 10 years to make it into something moving, I wanted it to have lungs so it can breathe. All this time I was taking notes, scribbling down ideas but again, not with the intention of making a film. But at some point I spread out all the notes that I had and it became like a collage, putting together a broken base of something, trying to fit all the pieces together so that’s how the story was born.

I used a technique that artists from the 1920s used, écriture automatique, writing without the intention of writing something, like painting a picture. I never thought of the audience, never asked myself what does the audience want to see? what do they expect? what would surprise them? It was a very egotistic process, I guess, I focused on what was interesting for me.

AKIZ: Interestingly, I never saw the film with an audience. Here in Locarno I was there only at the beginning and at the end, so I don’t know what scenes the audience found funny or what kind of laughter that was…

Knight: For me, the interest came form the ironic contrast between how the creature is perceived to be – scary and frightening,  and how it really is – cute and harmless, almost comical.

AKIZ: I agree, the creature is cute, it has no teeth and no blood so there’s nothing to be scared about! It’s not a monster, for sure. But even a bird can be scary in a place it doesn’t belong to, say you see a bird in a living room that wants to escape, people don’t know how to handle it.

Knight: At the Q&A, someone asked whether the creature was real or not? I must confess I was caught up in the same dilemma while watching the film: is the character going crazy or is the creature real? There are a lot of frames in the film where the creature appears on its own, that seems to convey the idea that the creature has its own existence, independently of the characters. But you must have deliberately played with audience expectations here.

AKIZ: Not really, because I never really cared about what the audience might think, if it’s real or if it’s not real. For her it’s real. There are people out there who hear voices, sometimes there’s someone there, at other times there isn’t. Everyone has its own reality. At night you may see something which you remember the following day and you know it was there. But no one else saw it. So what is real?

Film is the art form that comes closest to the perception of the human mind. But I never asked myself what is real and what is not real in this film.

Knight: Your focus was elsewhere, the question of the real was not something that interested you.

AKIZ: No, not in this film.

Knight: So what was it that interested you? The symbolism of the story itself? The character accepting and integrating the less flattering sides of herself?

AKIZ: Yes, and that’s the meaning of the story in a nutshell. That’s the basic story. I was also interested in the non-linear narrative: you have a creature at the beginning and people don’t know what it is, then the creature hurts people and they must find ways to get rid of it. What is also interesting is that after the parents see the creature, there is a shift: all the terror and panic goes to them. The girl comes to terms with herself. I wouldn’t say this is symbolic or metaphorical of a human being who comes to terms with herself but that is the storyline. Another thing that was important for me was that none of the characters, like the parents, are really bad people. They don’t have something bad in mind, they are just helpless. They think what they are doing is right. in order to deal with the problem.  Every character deals with the problem in the way they believe is right.

Knight: They all have their own perspective.

AKIZ: Yes, and that’s where the drama is.

Knight: The last scene in the car was very puzzling to me.

AKIZ: Interestingly, that’s the first image of the film that came to my mind, the girl and the creature escaping in a car. For me, they are going to the next level. wherever that may be. She is like a warrior for me, so wherever she goes, it’s on a different level.  So was the audience laughing at this scene?

Knight: Yes, because it was such a surprising scene, no one saw it coming. Sometimes when we are really surprised by something, the reaction is to laugh. How was the transition from art making to filmmaking for you?

AKIZ: As long as there isn’t someone forcing you to do things in a certain way, there is no difference. With film, the main difference is that you have a lot of people working for you. Taking a picture and making a sculpture requires only one person. Also when you’re writing, you’re by yourself. But the film required the collaboration of so many people, as you saw from the credits, the music, the editing, the writing.

Knight: Every film should be its own thing. Its own creature!

AKIZ: Its own creature, exactly! But at the same time, my film is a classical story. It’s twisted, but it has a beginning, a middle and an end!

Knight: That it has, for sure!

AKIZ: I guess, the most important thing for me is that everyone has the ability to see its own thing in the film. People like it because of personal reasons.

Knight: Do you see art like a sort of sounding board, like in therapy? You actually have some funny scenes with a psychiatrist in the film. You seem to say we need to come up with our own answers instead of being offered an answer. Or in the case of film, a message.

AKIZ: Absolutely. And for me the purpose of art is to workshop things. You have a piece of paper, put some paint on it, close it, open it, and you have a symmetrical image. That’s what artists used in the 1850s, that’s what they started with. Because you look at that form and you see what you want to see. That’s the purest art there is. Someone told me the creature signified something very specific to them and that’s the idea.

Knight: What was it like for you to collaborate with so many people?

AKIZ: I did films before so I am used to collaborating. What was nice about this project was that because we had no money, people were only motivated by their desire to do something different. So you end up with a crew where everyone really wants to do what they do.

Knight: So the production went seamlessly.

AKIZ: Yes, it was seamless. Sometimes I had to do the sound and editing by myself because I did not have a very precise idea of what I wanted, or because there was no one available. For the music for instance, the guy who did the score is a close friend of mine, I gave him an idea of what I was looking for, there was a back and forth, it was a very close collaboration.  And I worked very well with the main actress, she’s so smart, I didn’t really direct her.

Knight: A very strong performance yes, she was very believable in the role.

AKIZ: Wow, yes. And she never took acting classes. She understood very quickly what it is about. I did not storyboard anything, maybe some visual head shots. But my direction of her and of everyone else was very free. I never said to them: you sit here, you do this. I would just say: You come from this scene and now you want this and that. Then I would ask them: where would you sit, what would you do?

Knight: So you gave actors absolute freedom to create their own character in a way?

AKIZ: Absolutely, because actors know more about their character than I do. Also that’s the reason I used no lighting, only available light, to keep us free. You can put the camera anywhere you want.  Maybe the film doesn’t look like a documentary but we shot it like a documentary.

Knight: Are you already working on your next project?

AKIZ: Yes, because this film is part of a trilogy. Der Nachtmahr is about Birth. The second one deals with Love and Light. And the third one is about Death.

I made this triptych that is 2 meter tall and 6 meters wide. The left wing is Der Nachtmahr that you just saw. The right wing is the Death but all of them are about this creature, this entity that enters society and messes up everything, like a demon.

Formerly staff writer for The Independent Film Magazine, Dana is a freelance journalist who covers film, tech & startup culture. Between 2013-16, she traveled to film festivals all over the world interviewing filmmakers for a book project on contemporary cinema. Dana holds a BA (Hons) in Film & Media from Birkbeck, University of London (2013), a BA / MA in English & French Language & Literature (2005) and specialist training in bio-medicine.